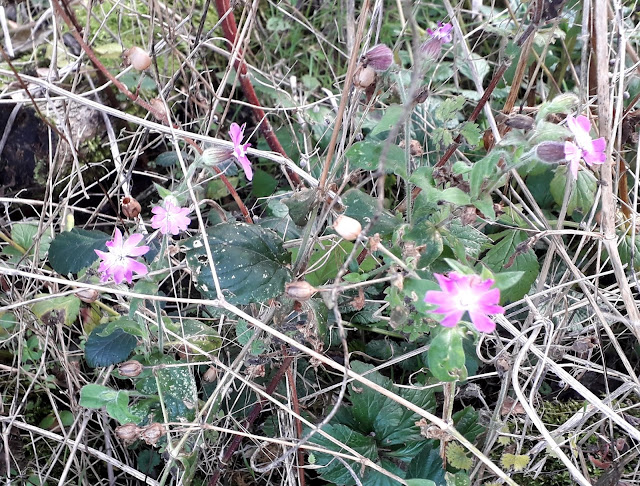 Still shining out bravely, a few red campion flowers near the shed. 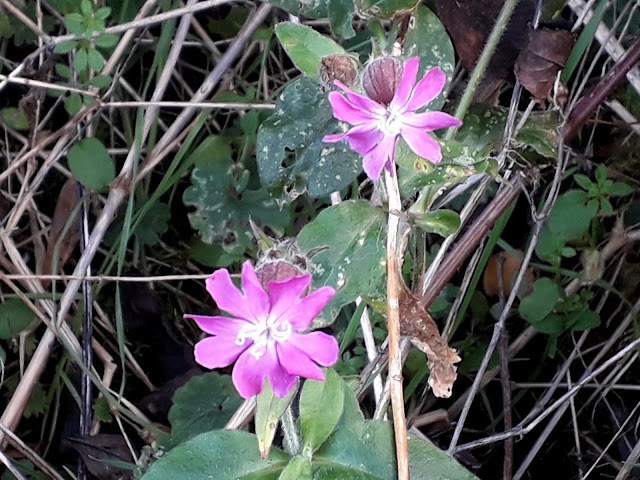 Posted by Jerry Dicker at 17:57 No comments:

I was just replenishing the leaflet holder at Filnore Woods when I felt something spiky behind my ear.  I scooped it out on to the pile of leaflets and saw this green creature lying on its back. 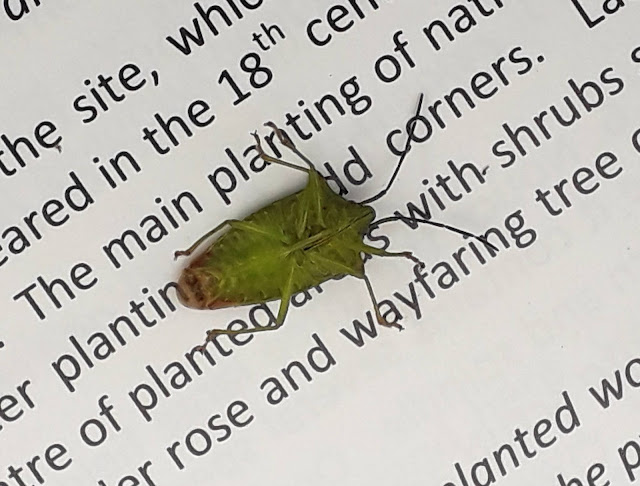 It used its back legs to paddle its way across the paper but when I flipped it over it stayed still for me. 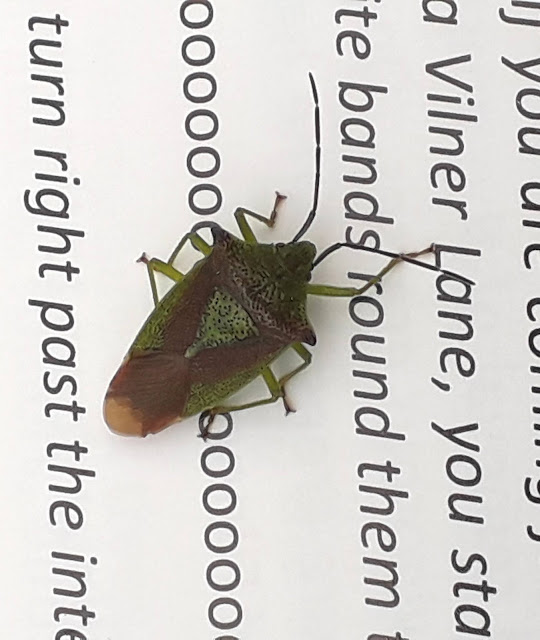 With the help of my Field Studies Council Aidgap 'Guide to Shieldbugs' I identified it as a Hawthorn Shieldbug (Acanthasoma haemorrhoidale).  It has fairly sharp 'shoulders' and a green and brown back with a green triangle in the middle.  It's a bit darker at this late season just before hibernating.  There are little black puncture marks all over its back.
In the spring HSBs mate and lay eggs.  The babies are called nymphs and moult up to five times, changing their appearance each time.  They mature in August and tuck in to their favourite food which is hawthorn berries.  They also like other berries like rowan, whitebeam and cotoneaster.
Like all true bugs they don't have jaws to chew; they have a long, sharp 'rostrum' which is like a syringe.  They inject the berry with saliva to soften it up and then suck in the resulting juice.  If you look at the top photo you can see where the rostrum lies against buggy's tummy while not in use.
Posted by Jerry Dicker at 19:01 No comments:

You may have seen this broken limb on the black poplar just over the stream crossing near the entrance.  It has snapped and the top is resting on the ground but it is still attached to the main trunk - just about. 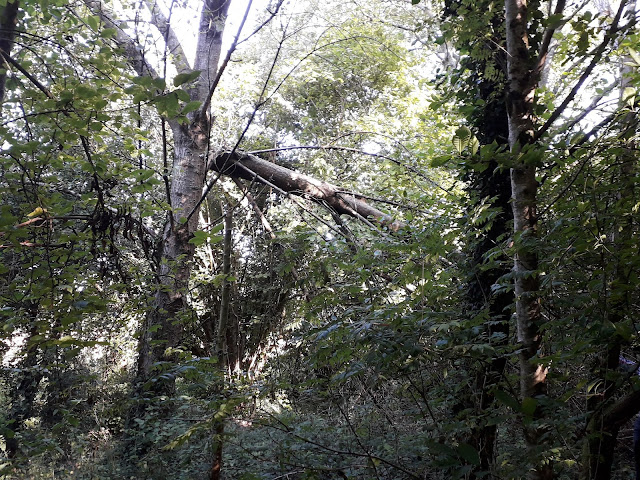 This was reported to South Glos Council in August, September, twice in October and again now in November.  You can see that the remaining stem is supported by a rather thin bit of wood at the top of the remaining trunk, in this photo taken in October. 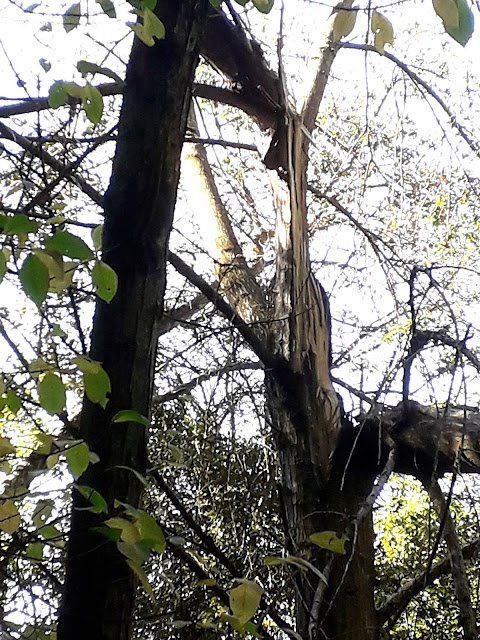 That branch has now also snapped and is resting on other trees towards the path.  Photo below was taken in November. 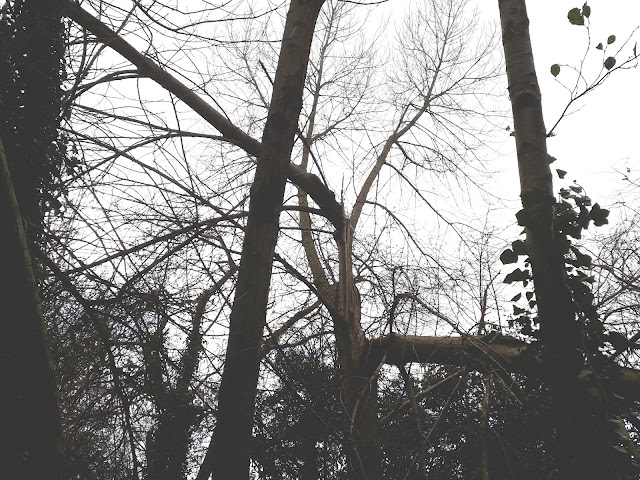 Please exercise care.  A number of other trees have shed branches over the last couple of months. Best not to walk through woods or under big trees in very windy weather.
Posted by Jerry Dicker at 16:59 No comments:

On today's walk we got caught in the rain and wind but just managed to keep our umbrellas from turning inside out.  It was quite exciting really.  Another one who enjoys a bit of stormy weather is the Mistle Thrush. 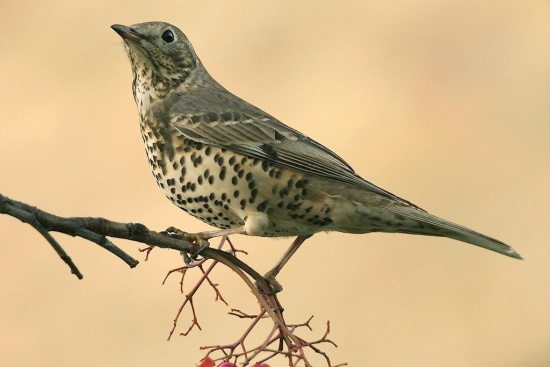 Photo: Dave T on the bird forum
It is also known as the Storm Cock because even in windy weather it will sing from the top of a tall tree as if it is really enjoying a blow.  The song is like a blackbird's but slower and shorter and without the squeaky bit at the end.  A blackbird who has forgotten the words. 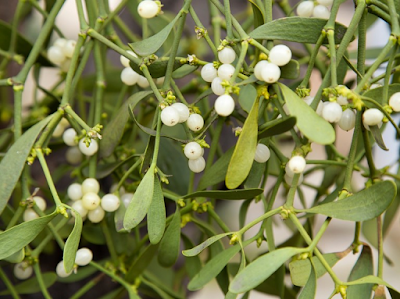 Photo of mistletoe berries: discover wildlife
At this time of year mistle thrushes like mistletoe and holly berries best and will defend a bush against all other birds, with a football rattle alarm call.  But they are quite shy of humans.  You may hear the rattling cry but only as the bird flies off from the berry bush it was plundering.
The song thrush has a quite different voice, repeating each phrase two, three or four times.  Listen to the differing songs of Mistle Thrush and Song Thrush on Maurice Baker's helpful youtube video
Posted by Jerry Dicker at 10:38 No comments:

One of our important jobs is keeping the paths comfortable for visitors to Filnore Woods.
Here are some of our volunteers - Peter, Jim and Will - having cleared and tidied the path near post 5, leading down to the footbridge. 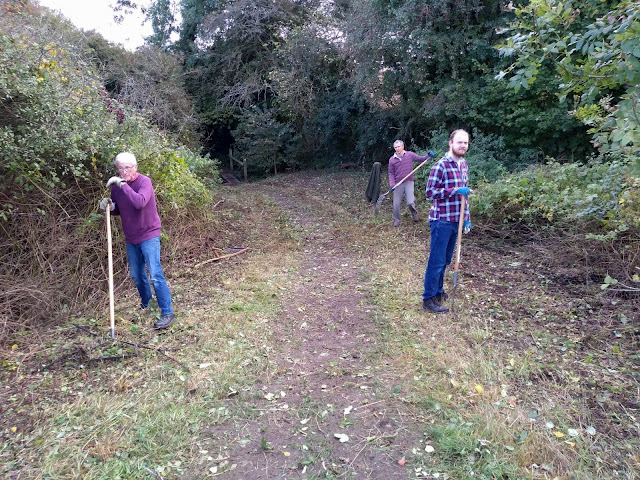 When vegetation grows in from the sides, the path gets narrower and more worn.  A wide path tolerates footfall better and doesn't get muddy so quickly.
Posted by Jerry Dicker at 16:34 No comments:

A foretaste of spring, already. 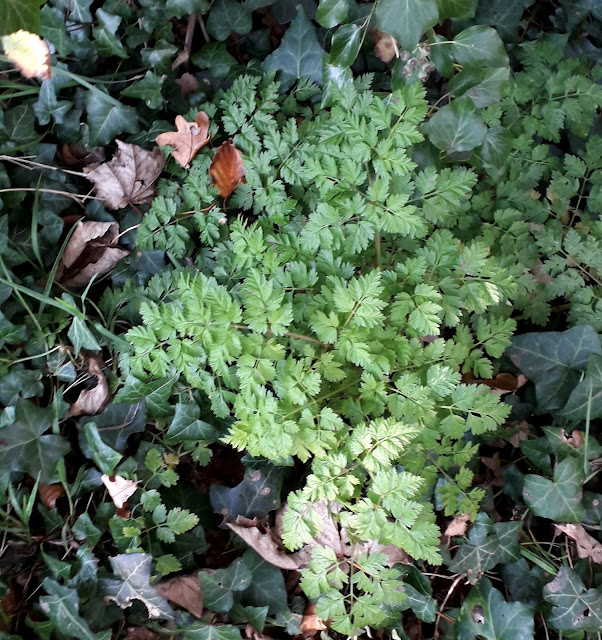 Fresh, green, ferny leaves of Cow Parsley getting ready for the flurry of flowers in April
Posted by Jerry Dicker at 11:20 No comments:

Just discovered fascinating website  Know Your Place  which includes maps dating back to tithe maps of 1841.
Looking at Thornbury on the 1844 OS map, it shows the site of today's Vilner Lane Wood to be part of Thornbury Farm.
On the map below you can see the former railway station, Rosemount House, the bathing place, which is now The Bathings retirement flats, and Vilner Lane.  I have marked in green the site of Vilner Lane Wood, sister to Filnore Woods. 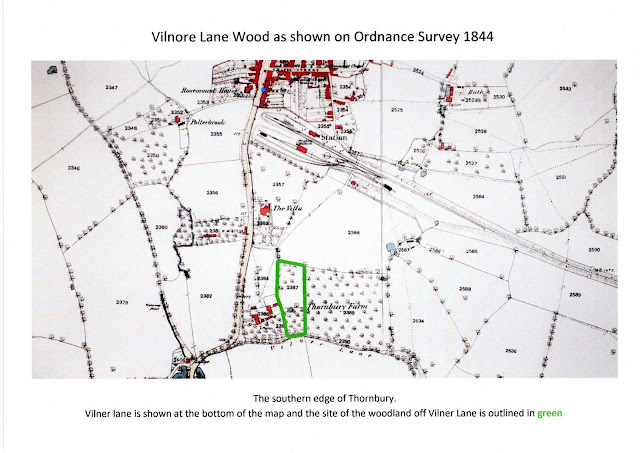 We shall have to change the name we gave to Vilnore Lane Wood because it is so similar to Filnore Woods and  people find it confusing.
Posted by Jerry Dicker at 16:04 No comments: